Man's belief in religion and disease is all founded on the opinion that man must die or lose his life; therefore, we are called upon to do something to save it. This keeps man in ignorance of himself or life and all the time troubled from fear of death. Now destroy man's belief and introduce God's truth and then we are set free from this world of error and introduced into the world of light or science where there is no death but the living God or science. This science will lead us along to that happy state where there is no sickness or sorrow or grief, where all tears are wiped away from our eyes, there to be in the presence of this great truth that will watch us and hold us in the hollow of its hand and will be to us a light that will open our eyes. We shall not then be deceived by the blind guides who say, 'Peace, peace,' where there is no peace. Then we shall call no one master or leader for there is only one that leads us and that is God. He puts no restrictions upon us for our lives are in His hands or science, but our happiness or misery is in our belief." —Phineas Parkhurst Quimby, June, 1860

Source Article: The Effect of Religion on Health

Phineas Parkhurst Quimby was born on February 16th, 1802 in Lebanon, New Hampshire. He was the sixth of the seven children of Jonathan Quimby and Susanna (White) Quimby. Jonathan was a skilful blacksmith by trade and relocated his growing family to Belfast, Maine in 1804. The original Quimby home was located on the current site of the Belfast Free Library Annex on High Street. The Quimby blacksmith shop was situated directly across the road from their home and together they perched on Quimby Hill with a splendid view of Belfast Bay. After many changes and alterations the original Jonathan Quimby house was razed ca 1970. 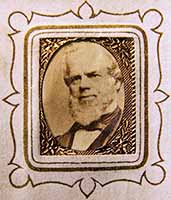 Phineas Parkhurst Quimby, known as “Park” to his friends and neighbors possessed an extraordinarily inquisitive, perceptive, and inventive mind. Although the availability of a local public education was meager at best during his formative years, he continued to educate himself by focused observation and reading many books. He had a natural aptitude towards anything mechanical and followed his oldest brother William into the world of clock making. William Quimby apprenticed with the first clockmaker in Belfast, Abel Eastman, and took over Eastman’s business about 1820. Park apprenticed with his brother William and made beautiful clocks. An original P. P. Quimby clock is a rare and highly desirable treasure.

From 1847 until his passing on January 16th, 1866, Phineas Parkhurst Quimby devoted his life to healing the sick. In the fall of 1859 he opened an office in the city of Portland, Maine. His youngest son George Albert Quimby worked as his office clerk. Additional secretarial services were supplied by two of his new patients, the sisters Emma G. Ware and Sarah E. Ware.

Dr. Quimby, as he was then known, treated over 12,000 patients during those years. Most notable were Julius Dresser and Annetta (Seabury) Dresser, early proponents of New Thought who met as Quimby’s patients and subsequently married; Warren Felt Evans, a practitioner and author of mental healing (as recorded by Julius Dresser in The True History of Mental Science pp. 20-21); and Mary M. Patterson (Mary Baker Eddy), of the Christian Science movement.

There are two hundred eleven pages penned in Quimby’s own handwriting in the Manuscript Division of the Library of Congress collection in Washington, D.C. This represents solid historical evidence that P. P. Quimby was a prolific writer. A small sample of Quimby’s handwriting may be viewed in a slide show by clicking on the image above. (5 images)

His Writings and Beyond

Phineas Parkhurst Quimby: His Complete Writings and Beyond is the ultimate reference source for historically accurate information of this nineteenth-century clockmaker who became a metaphysical teacher and healer.

An Invitation by Phineas Parkhurst Quimby

The text for this invitation was extracted from the article: Cause of Disease, written by Phineas Parkhurst Quimby in 1863.

This website was created March 7th, 2002 and is maintained by — fellow clockmaker, student and a friend of “Park”.